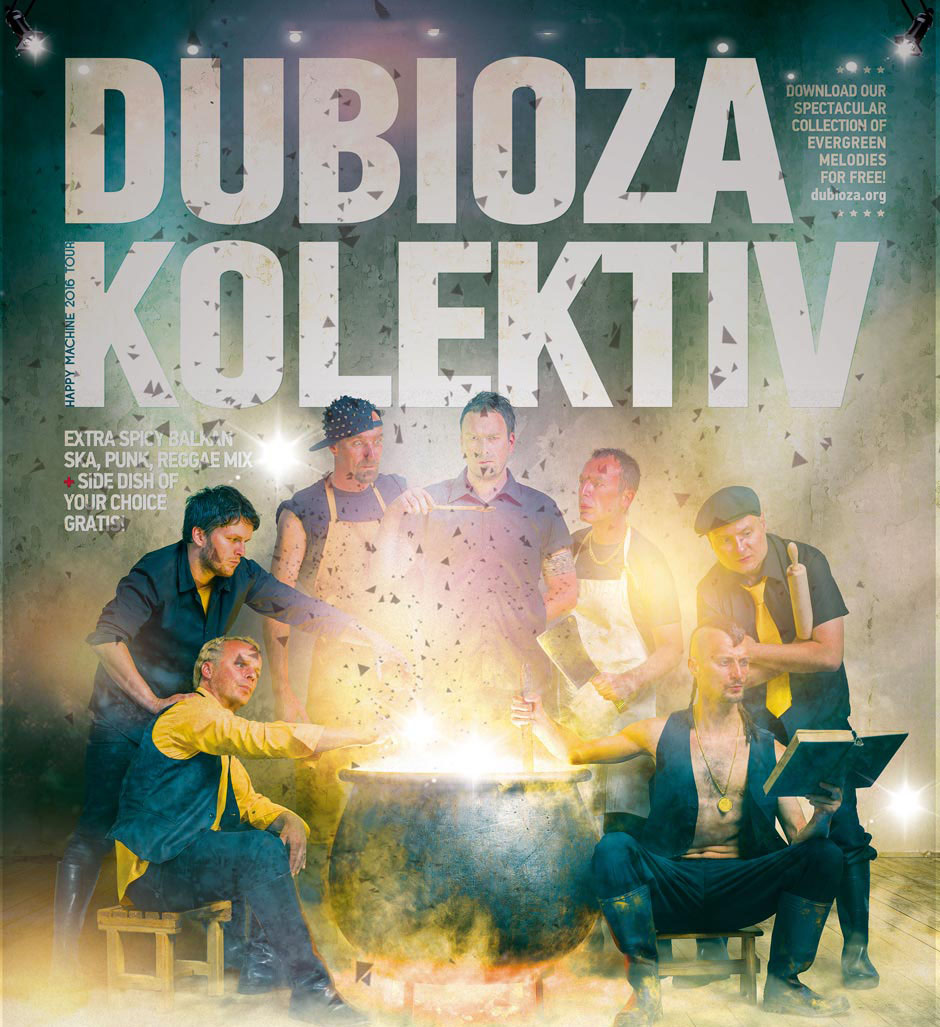 Dubioza Kolektiv is the coolest, most awesome thing happening in music right now. They are a collective rather than a group running a label; independent, with a super-positive management providing a platform for deserving artists to blossom in an overly saturated market. These guys just do good music. Period. Also, they know how to throw a damn good party.

DK are a band from Bosnia known for their fresh take on hiphop, mixed with reggae, dub, rock and Bosnian folklore; others more familiar with the name know them as a killer live band, and notorious leaders in the ﬁght for social change in their home country. Though relatively new to audiences in “The West”, the group has already established itself as among the best and most popular live outﬁts in Eastern Europe.

Initially, the concept of the band came through an urgent need to voice the problematic issues in Bosnian society, while also showing the rest of the world that life in the Balkans exists outside of the familiar and overused media stereotypes. Understandably then, many of Dubioza Kolektiv’s lyrics revolve around themes of peace, understanding and tolerance, alongside an extreme criticism of nationalism and injustice; but what gives these lyrics weight is that they speak with the authority of direct experience. In SXSW 2016, 40 Bands You Need to Hear Dubioza Kolektiv is top on the list.

Now, after eight years and ﬁve albums under their belts, (their sixth, “Wild Wild East” due for international release in Summer of 2011), they can claim a list of accomplishments that would make any musicians proud: a diehard fan base (“5 do 12” boasts over 100,000 downloads and counting). Outside of the Balkans, they’ve been nominated for “Independent Album of the Year 2011”, have been featured recognized by the BBC and Time Magazine as a legitimate voice of Bosnia. Now, with the support an international record label and months of touring ahead, there is nowhere for the band to go but up.

Dubioza Kolektiv’s 2011 album, Wild Wild East, has garnered international attention. Most of the songs are in English which opens the band up to new audiences. Critics have generally given it good reviews and cited the originality of mixing so many styles of music. Also the album is mostly responsible for the band’s victory of the Best Adria Act in MTV European Award 2011.[7] Happy Machine, Dubioza kolektiv’s 7th album, consists of 3 tracks: two in English and one in Spanish.

But let’s back to the music: if you’re looking for macho, money-and-ego driven posturing, you won’t ﬁnd it here; no MTV “rude boy” gangstas, no strippers or bling, no brands or corporate endorsements from the international fashion industry. Rather, they take on traditional musical forms with their unique perspective, shaped by a war that changed their lives forever; and all done with a positivity that feels like breath of fresh air. If there was an award for Independent Artist of the Decade, they would have my vote.